“After the petitioner was afforded all opportunities and appeal process, the criminal appeal filed before this court was heard at length.

The petition sought recording of calls, documents and reports by an investigating agency like CBI and to declare that the convict has legal and constitutional rights to approach any court at any time even in the last minute of hanging.

It also sought a declaration that concealment of documents by the state in trial is a serious fraud which vitiates a trial being unfair.
Mukesh in his petition said that even after his execution, facts in the case must be examined judicially so in the future no “innocent be victim of failure of justice under media pressure”.

“Petitioner is not looking for any adjournment of execution of death warrant and seeking justice that even after his death truth will survive and justice is done and seen by the world that he was innocent,” the plea said.

The high court had on Wednesday said there were no grounds to interfere in the detailed and reasoned order of the trial court.

The wife of Akshay Kumar, who has filed for divorce, fainted outside the Patiala House court and said she and her minor son be hanged too.

Kumar’s wife, Puneeta Devi, filed a divorce petition before a Bihar family court recently, saying she did not wish to live with the label of “a rapist’s widow”.

The Supreme Court has refused to entertain the plea of Mukesh Singh challenging the Delhi High Court order which rejected his claim that he was not in the city when at the time of crime on December 16, 2012.

A bench of Justices R. Banumathi, Ashok Bhushan and A. S. Bopanna said the convict has exhausted all his remedies and no fresh evidence can be entertained at this level.

The bench said it does not find any merit in the plea and hence it cannot be entertained.

“The petitioner has raised points on the merits of the trial, that is there was no consideration of the evidence about medical status of accused. Has raised doubts about arrest of the accused from Karoli,” the bench said in its order.

It said the convict was given every opportunity to raise his points and he was duly heard.

“I want justice too. Kill me too. I do not want to live. My husband is innocent. Why is the society after us?,” she said while crying hysterically outside the court.

“We were living with the hope that we will get justice but we are being killed everyday for the last seven years,” she added.

Devi, who beat herself with sandals, was consoled by the lawyers present outside the court.

The Delhi court on Thursday dismissed the plea of three of the four death-row convicts in the 2012 Delhi gang rape and murder case seeking stay on the execution which is slated for early morning on Friday.

The Supreme Court has also dismissed Akshay Kumar’s plea challenging the rejection of his second mercy petition by the President.

A bench of Justices R. Banumathi, Ashok Bhushan and A. S. Bopanna said no ground was made out in Akshay’s plea for judicial review of the decision rejecting mercy petition.

Akshay had filed the second mercy petition on Wednesday which was rejected by the President on Thursday.

He had filed his first mercy plea on January 29 which was rejected on January 31.

The court was informed by the public prosecutor that second mercy pleas of Akshay and Pawan, were rejected on the ground that the first such plea was entertained and considered on merit.

He told the court that advocate A. P. Singh, counsel for the convicts, was giving false information stating second mercy plea of Pawan was pending and said that all the convicts have exhausted their legal remedies.

Singh also said that convict Akshay’s wife has filed for a divorce in a city court in Bihar which was pending, to which the special public prosecutor said any other petition does not fall under the purview of legal remedy in the present case.

The victim’s mother, Asha Devi, said her daughter’s soul will now rest in peace and she had got justice seven years after the gruesome gangrape and murder that shook the nation.

I want justice too. Kill me too. I do not want to live. My husband is innocent. Why is the society after us? 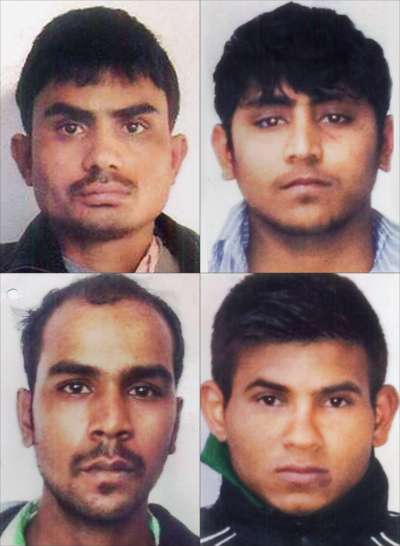