Indonesian authorities have issued a tsunami warning after a 6.9 magnitude earthquake struck in the Molucca Sea, eastern Indonesia.

The U.S. Geological Survey said late on Sunday that powerful quake was centred 185 kilometres (114.8 miles) southeast of Manado at a depth of 24 kilometres (15 miles).

The Indonesian Geophysics Agency (BMKG) issued a tsunami alert — revising the magnitude higher at 7.1 for the temblor that struck the sea off North Sulawesi in eastern Indonesia. 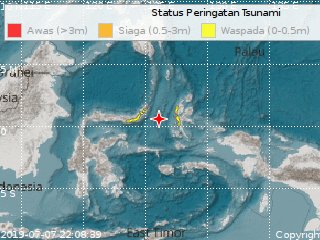 A graphic posted on Twitter by Indonesia’s geophysics agency predicted waves of half a meter (1.6 feet) for parts of North Sulawesi and North Maluku.

The quake caused panic in the city of Ternate in the Maluku island chain, where people ran to higher ground, a witness told The Associated Press.

The earthquake was felt in Manado and Bitung in North Sulawesi, as well as Ternate in North Maluku, according to the BMKG.

The cities of Bitung and Ternate, as well as Halmahera and Tidore in North Maluku, have been put on standby for a potential tsunami by the BMKG.

In a Facebook post, the Singapore embassy in Jakarta warned Singaporeans about the earthquake and tsunami alert.

Indonesia, a vast archipelago of 260 million people, is frequently struck by earthquakes, volcanic eruptions and tsunamis because of its location on the “Ring of Fire,” an arc of volcanoes and fault lines in the Pacific Basin.